Their Snikittyness the Goblin ruler has a mighty need and it's up to you (and a couple of friends) to see that it is met!

Stacks of Goblins is a comedy roleplaying game for 2+ players where you play one Goblin in a stack. Each position in the stack has different responsibilities and abilities, but you will be shuffling and changing places throughout the game.

Your goal is to infiltrate the People Places and collect items for yourself and the Goblin King.

Strap in for a game of chaos, comedy and shenanigans!

In order to download this game you must purchase it at or above the minimum price of $8 USD. You will get access to the following files:

Support this game at or above a special price point to receive something exclusive.

If you're in need and unable to afford the game then please feel free to take a copy from this pool.

We will add another copy to the pool every time someone likes this game enough to give it a 5star rating on itch.

What a charming game! Really excited to try it out

Hi. How do I gift this game to someone else? Many thanks in advance.

Hello!
Thanks for reaching out, we're not entirely sure as we've never done it ourselves, but this article from itch itself is hopefully still correct!

Played this with 2 six year olds and an adult, with another adult as GM (goblin master?). It was a lot of fun. The kids got the idea of switching and things sometimes not going as planned. They had a blast and we made it from sneaking onto the train to parachuting out in takeout boxes using a wizard's hat as a parachute.

However they were pretty cooperative, and I think for a more cooperative table you might want to adjust the result bands to make mixed success more common, since extra D10s are pretty powerful.

The end game mechanic could use a bit more clarity - does it simply become impossible to succeed? What does that mean? Should they just use the tokens to get an automatic success? I feel like they need some way to still succeed with the dice once the tokens become limited. Though maybe the ceiling is on individual dice rolls, but you can still add multiple? It just wasn't very clear in the rules.

Finally it might be helpful to have a page of inspiration for things that can happen due to failure, like a pbta GM moves list, since a low prep high improv game can have a high cognitive load.

Thanks for the feedback, all good points we'll take into consideration if we do a second edition!
We're glad you had fun with it regardless!

And to clarify, the intention is that yes, towards the end stuff becomes impossible without burning your last few tokens meaning you'll have to drop some of your loot on the way out.

The amount of tokens left is the maximum a dice roll result can be. This means that as the game progresses you will become less likely and able to succeed at rolls without working together.

The token ceiling is definitely for an individual dice. The goblins in the middle can still help.

Yes, thanks for clarifying, I think we misunderstood a little bit what the specifics of the question were.

The token ceiling does apply to every dice so you might need a lot of help towards the end but it does work as you said yes.

Stacks of Goblins was an awesome game full of fun shenanigans and unique mechanics that allowed for a lot of versatility and interesting gameplay!  Plus... you get to play as mischievous goblins, which is a total win. Would highly recommend!

Check out more in my full review here:

Hi! This game seems like it has excellent nerd party potential. How does it scale with the larger groups? We usually play in a group of 7-9 people. Can anyone help out with an answer?

I've not had the chance to try it out at this scale myself yet, and I am not aware of anyone who has, but I did design the rules with scaleability in mind (and the last page includes some rules twists about how you can accommodate some larger player numbers) So I don't know how smoothly it'll run, but the rules should definitely still function at least!

Very excited for this! Is there a single-page version of the PDF? It looks like only spreads which aren't easy to print as a booklet.

Good shout, I hadn't realised I hadn't sorted one out. I'll export and upload that tomorrow for you!

Okie dokie, that should be done! Thanks for reaching out and let us know if there's any problems with it! Thanks!

Perfect, thank you for the prompt response! 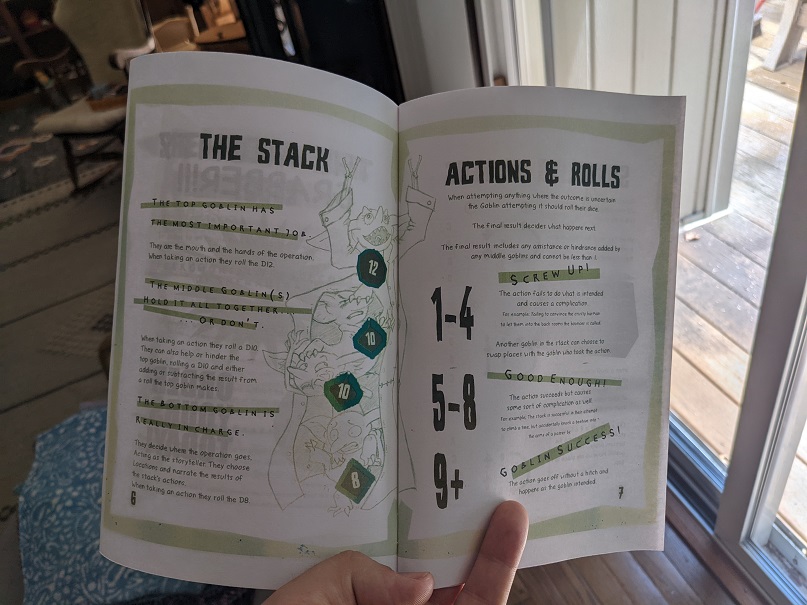 Not only is the concept of Stacks of Goblins a delight, but the ideas from the prompt tables are excellent and the mechanics encourage chaos.  I played this with an 11-year-old and a teen and we had a grand time!  I especially want to mention that having the ability to switch in and out of the story teller role is a great way to give players who might be curious about what it’s like to run an RPG a place to test the waters.  Thank you for creating this!

And if anyone is interested in listening to our session, it's now available via the Almost Bedtime Theater podcast as Episode 15!

If you're interested in seeing how the game works in play I thoroughly recommend checking out this podcast! It's is so in tune with how we envisioned the game and is tons of fun!

This game makes sowing chaos even easier than before! I love that the seamless design makes this easy for any level of player to learn, and the way you can shuffle through the roles stack makes for a much more dynamic game experience. Not to mention my goblin heart loves the mischief and  inspiration in those tables!! 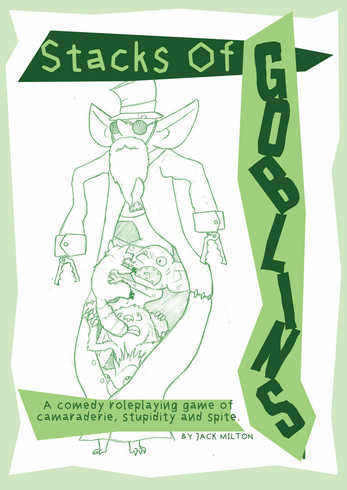 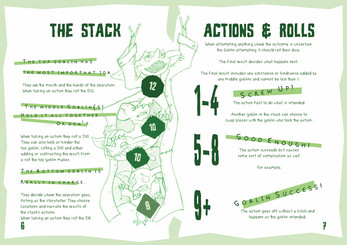 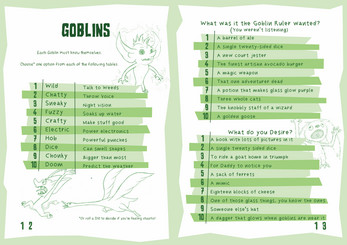